The Most Bizarre Baseball Match-up Ever

That might seem like too big a claim for any game, but I dare you to find one that's more bizarre--not the game that was played, but the opponents. Baseball historians find many strange things along the route to whatever we're actually looking for, and that was the case during some research into baseball in Washington D. C. Here is the actual newspaper item from September 1, 1926. 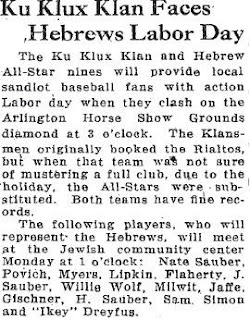 How does that grab you? It's incredible on so many levels! For one thing, even though the 1920s were the heyday of the KKK, they were a secret society, so what were they doing playing an advertised ballgame? I guess you'd have to call them a barnstorming team -- sort of a "House of David Duke" squad. Did they wear hoods when they played? What did their uniforms look like? It's hard to imagine their ballfield presence against any team, but what on Earth compelled them to contact the Hebrew All-Stars to play a game? They were accustomed to hounding Jews in the dark of night, not partaking in the conviviality of an afternoon ballgame with them. And how about those Hebrew All-Stars accepting the invitation! Talk about being willing to oppose your enemies! Does this tell us that baseball is/was such a unifying social force that even sworn enemies will forget their hatred for a couple of hours just to play ball? Should W have invited the folks at Al Qaeda to a ballgame on the front lawn of the White House instead of driving them into hiding? The mind truly boggles.

They did play the game, and here's the box score (presumably with the actual names): 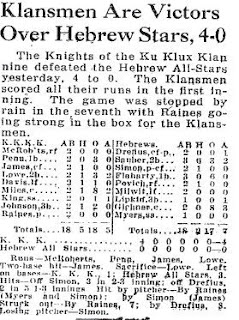 A few things stand out about the game, in which the KKK led 4-0 when rains put out their fire and ended the contest. The KKK pitcher was also Raines, and he hit two of the Hebrew All-Stars with pitches. I wonder how many other pitches were under their chin. The Hebrews pitcher, Sam Simon (who won easily in several other games I found box scores of from that summer), actually started the carnage by hitting the third KKK hitter with a pitch, but he got knocked out early. Later, he was hit by a Raines pitch. Was that payback? "Ikey" Dreyfus pitched well, but didn't hit anybody. So was there a beanball war or not? One other question: what was Flaherty doing on the Hebrews team? Was the cleanup hitter a ringer?

It's just hard to imagine those two teams side by side without open hostility, especially after the players were plunked. When I was a teenager, a group of us (all Jewish) were playing softball one Saturday when we were challenged by another group which included a couple of well-known anti-Semites from our high school. Sure enough, changing sides between innings, one of them deliberately walked into the path of one of our players, accused him of causing the collision, and punched him, breaking his nose. We wound up in court over that one, but he got away with it. Did anything like that happen in 1926? Were there repercussions after the game? We know who you are!

As a follow-up to that contest, I've put together my own Hebrew All-Stars team and an all-KKK team, and maybe someone out there can plug these rosters into a simulation game and see which team wins. Here's the team culled from Jewish major leaguers, with just a couple of players not in their primary positions:

That's a pretty formidable squad. There's a lot of power, especially in the outfield, a solid bench, and very good starting pitching. Koufax would be the big difference against any opponent.

For the all-KKK team, I did not look for players who were actually members of the KKK. There are stories about a number of players, including a couple of Hall of Famers, being members, but identities of members were hard to determine (apart from this sandlot squad). Though it seems inevitable that some major leaguers were KKK members, I haven't seen the evidence, so for this team I went strictly by the circumstantial evidence of having names that fit the KKK profile. So here goes:


There you go. Sandy Koufax and Whitey Ford did face each other in the first game of the 1963 World Series. Koufax retired the first 14 Yankees, including nine strikeouts and four foul pop-ups. By the time the Yankees got a baserunner, the Dodger had drilled Ford for five runs, and the Dodgers were on their way to a four-game sweep (including another Koufax victory over Ford in Game 4). More significantly for our purposes here, neither pitcher hit a batter in either game. Now that's the way to play ball!

Posted by Gabriel Schechter at 6:55 AM

Schoenweiss? Schoenweiss? come on... you've got to be kidding me.... Shoenweiss? Really? I'd rather have a Bucky LaGrange than shoenweiss (if you don't get the reference, you could look it up)!

I saw you in a report on WWOR 9 TV tonight.

I have a bit of trivia for you.

The New York Yankees have not won a world series with a President who belonged to the Republiklan party since 1958 when the Yanks won their last world series under Eisenhower.

The Yankees did not win any world series under Nixon, Ford, Raygun, George Herbert Hoover Bush, and SloboGeorge MiloseBush.

You can reply to info@democratz.org

As you say, "incredible on so many levels," most of which you've covered, but I'm surprised that you didn't point out that the KKK pitcher seems to have been a K specialist: 7 of them!

Don'tcha wish Roth had come across this while doing research for The Great American Novel?

Re the All-Semites: what, you prejudiced against converts, or just against Panamanians?

Re the All-Ks: what about Ozzie "the Wizard" Smith?

To Freddy: yeah, I knew you'd go nuts about Schoeneweis being on the team. He's there because I knew he'd be the first pitcher the KKK team would torch.

To Cheeseblab: "The Wizard" did sound like a logical choice for that team, but I didn't want to endanger Ozzie by making him go in their clubhouse.

could the "Povich" listed in the KKK/Hebrew All-star story be Shirley Povich? He would be about the right age, and he was in DC at the time

Regarding the KKK pitcher's "K" total: what is it that Crash Davis said? "Strikeouts are fascist." ;-)

I can see it all now: a new movie in which a team of Negro League all-stars wants to play in a southern town, comprised almost entirely of members of the KKK. One white man, who loves baseball more than anything, sees the errors of his ways and, with courage and conviction, stands up to his bigoted townsfolk to break the cycle of hatred and convinces them that "this great game of ours" can overcome anything. The game is played and in the stands: Branch Rickey, who watches a phenom by the name of Jackie Robinson.

How does Rod Carew not make this all-Semite team?

during the 2nd - and most popular - incarnation of the Klan from the early to late 1920's, it was far from a "secret" society. Membership was in the millions (as opposed to today's version which is in the thousands), and many prominent politicians and businessmen were members. Though never proven, Pres. Harding was thought to have been initiated during a ceremony at the White House. So, a baseball game reported in a blurb in the newspaper wouldn't be far-fetched; playing against the Hebrew All-Stars is a whole different level of weird.

I'd like to add John Rocker to the Klan team.

1) I love the idea of a movie based on this game. Great plot line! As soon as I hit the MegaMillions, I'll finance it!

2) I stand corrected on the Klan being a "secret" society in the 1920s. In fact, further research revealed a game at Griffith Stadium in which the Klan (including female members) marched in a pre-game civic parade on the field.

3) Great suggestion about John Rocker. Should've thought of him.

4) About Rod Carew: although he married a Jewish woman and their children are raised as Jewish, there is no evidence that Carew himself converted. He does not claim to have converted, and he is not included in the sets of baseball cards honoring Jewish players that have been produced by the American Jewish Historical Society.

The KKK was in fact not a secret society in the 1920's, but was very different from today. Millions held membership, including senators, congressmen, and local officials, and membership was often public, as were their demonstrations and activities.

What an odd matchup though...

The best reliever has got to be Billy Wagner.

You have Sid Gordon playing the outfield... I only remember him as a 3rd baseman.

Need To Increase Your ClickBank Commissions And Traffic?