This has been a tough winter for baseball Hall of Famers. Sparky Anderson died in November, the seemingly indestructible Bob Feller left us in December, and now Duke Snider is gone. I never got to meet Snider, which I'm told was my loss. But he was the protagonist in one of my favorite Hall of Fame stories, and I always think about him when I traverse the walkway that connects the museum with the library atrium.

Until 1994, the museum and library were separate buildings, and many people didn't even know the library was there unless they drifted into Cooper Park and found the library entrance. I didn't know about it when I first visited the Hall of Fame in 1969, and never saw the library until I moved to Cooperstown in 1991 (for one year) to do research at the library. That year, I hardly spent any time in the museum; it seemed like a separate entity.

If the Hall of Fame hadn't needed more space for plaques in the gallery, the buildings might still be separate. As part of the expansion of the plaque gallery, a curving walkway was built containing blown-up images of some of the most famous artifacts in the library (such as FDR's "Green Light Letter" okaying the continuation of major league baseball during World War II, the lyric sheet for "Take Me Out To The Ball Game," a scorecard from Bobby Thomson's "Shot Heard Around the World" home run in 1951, etc.). Emerging from the walkway, you find a large glass wall with a lovely view of Cooper Park, with a three-sided courtyard next to the building.

In time, that courtyard has been decorated with benches and several sculptures. Stanley Bleifeld, the sculptor, is a Dodgers fan, and the first piece he donated to the Hall of Fame depicted the stars of the Dodgers' only championship in Brooklyn. The two figures from Game 7 of the 1955 World Series--pitcher Johnny Podres and catcher Roy Campanella--are 60'6" apart. Podres is following through on one of the pitches that stymied the Yankees that day, with the squatting Campanella ready to catch it. During the summer, there is a constant stream of people taking photos around the pair--most often standing in the batter's box in front of Campy. Here is an image of it taken today, following the latest upstate New York snowfall. 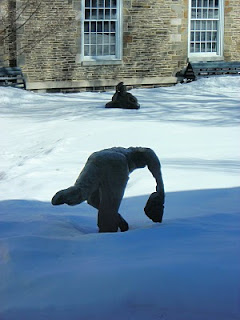 Several years ago, Duke Snider was visiting the Hall of Fame, and he and his party were given a tour of the library and the museum. Exiting the library atrium, they were greeted by the statue of Snider's old teammates. The party stopped. The tour guide, a Hall of Fame employee who shall remain anonymous here, said, "What do you think, Duke?"


Here's a closer view of what Snider was looking at: 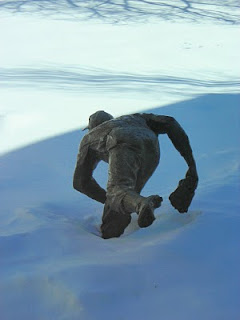 Snider reportedly took a good look at the scene, tilting his head and reminiscing. Finally he spoke. "Yeah," he said, "that's Podres' ass all right. I looked at that thing for eight years!"

And who could argue with the Duke's-eye view? Was there ever such a perfect question asked of the only person on the planet who could answer it properly? Perhaps the staffer who asked it was expecting some piece of nostalgia about Game 7 of the 1955 World Series, that World Series in general, the feeling the Dodgers had after finally beating the hated Yankees, a story about Podres or Campanella or some catch Duke made to save a game for Podres, or something related to baseball. Nope. Snider looked at the sculpture, realized "well, that's the view they're giving us here," and responded to that.
I wasn't there but I feel like I was, and every time I walk past that spot with a visitor, I make sure to tell the story. It always gets a big laugh. I hope it makes you laugh, too, as we pause to mourn another departed immortal.
Posted by Gabriel Schechter at 1:35 PM

Terrific Gabe, and such lovely photos.