When the press release was distributed by the Hall of Fame on August 18, it seemed like a cool thing--dedicating a library space to the archives of baseball's nine commissioners. As the release put it, "Cooperstown will also now be forever celebrated as the archival home for the Office of the Commissioner following the Wednesday night unveiling of the Allan H. 'Bud' Selig Center for the Archives of Major League Baseball Commissioners at the National Baseball Hall of Fame and Museum, during the Owners' Meetings."

Upon further review, however, it turns out that this unveiling was mostly for show, a symbolic gesture to Herr Commissioner near the conclusion of the Winter Owners' meetings, held in Cooperstown for only the second time, giving each party a chance to suck up to the other. The Hall of Fame, having finally shed the Doubleday Myth, managed to create another one with the dedication of an empty, inaccessible space in honor of Selig.

Here's how Hall of Fame Chairman of the Board of Directors Jane Forbes Clark described the "Center," located off the library atrium in what was formerly offices for the Education Department: "The Selig Center for the Archives of Major League Baseball Commissioners will ensure a permanent home for the documentation and preservation of the Office of the Commissioner's contributions to baseball history. This archive will provide a central location for the study and research of the importance of the Office of the Commissioner, and its role in shaping and advancing the National Pastime for nearly a century." 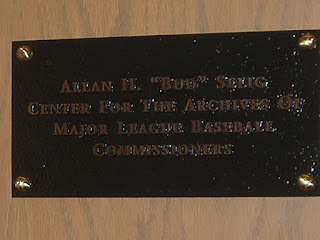 What did she tell us here? In this place, this "center," we can study and research the preserved documentation of the contributions made by the commissioners. Go in there, American public, make yourself comfortable, and read all about it. Sounds great, and it would be if it were true. But none of it is true. First of all, you can't go in there. I can't go there. Even Hall of Fame staff can't go in there without tracking down one of the handful of people with a key. If you want to trek across the country to do research on that book about one of the commissioners, you won't be allowed in there either. But it doesn't matter, because there won't be anything in there anyway.

The Hall of Fame has a fair quantity of archival material related to baseball's commissioners--more than a dozen, I'm told. The largest collection is the papers of Bowie Kuhn, sent by Kuhn a year or two before he died, when he was afraid that legal problems might result in those papers being seized. But he stipulated that the papers can't be accessed until twenty years after his death. So nobody gets to see those dozens of cartons.

But the other archives won't be in the "Center for the Archives" either. Read that a couple of times to let it sink in. Let's open up a center for the archives, even though we can't put the archives in there. Why not? Because archives need to be preserved in a climate-controlled environment. Every item in the Hall of Fame's collections,apart from the library files containing newspaper clippings, is stored in climate-controlled areas in the museum basement. Temperatures are cooler in those rooms, especially where they keep the photos (at 52 degrees). The Hall of Fame is not about to install climate control in a little office off the atrium so that archives can actually be stored there. Why should they? It isn't as if anyone is going to be allowed in that room!

The procedure for looking at Commissioner-related material remains unchanged from what it has been for many years. You make an appointment to visit the Giamatti Research Center, tell them the archives you'd like to examine, and they bring the material to you in the main research center. The presence of this space--named after an actual commissioner--is irrelevant to library staff and visiting researchers alike. It is a non sequitur, a myth, a fraud.

Yet somehow it is perfectly fitting for this occasion and for this commissioner. The largest of the vacated offices will be available for meetings and conferences--but only involving VIPs. Even though the press released mentions photos (of the nine commissioners) and other items on display, it won't be open to the public, nor will it be part of tours (except for VIPs). There is a skeletal collection of books in the "Center," duplicates of Hall of Famer bios and so on. There's nothing to do in there but sit and thumb through stuff not related to commissioners, which reportedly was exactly how Selig enjoyed himself for awhile after the unveiling. Maybe he was reading the secret documentation that Abner Doubleday really did invent baseball, as Selig still believes was the case. If he believes the Doubleday myth, no wonder he thinks that people will be able to see archives in this archival center.

So even though the place isn't what Jane Clark pretended it was at the unveiling, it is what it is--empty, presumptuous, useless, and inaccessible--and therefore the most fitting tribute to Bud Selig's legacy that I can imagine. 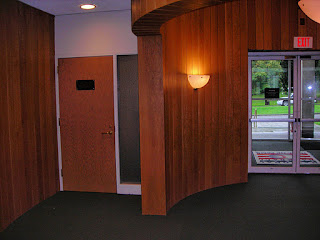 Posted by Gabriel Schechter at 4:24 AM

Nice information, valuable and excellent design, as share good stuff with good ideas and concepts, lots of great information and inspiration, both of which I need, thanks to offer such a helpful information here. door lock

It might as well be the door to the men's room - that's what it looks like anyway.