Roger Angell, Then and Now

At a party last weekend attended by a number of savvy baseball historians, I managed to wow them with a little artifact I didn't remember I had until a few weeks ago. Going through one of several cartons of old correspondence, I found the letter reproduced below, sent to me in 1980 by Roger Angell.

Only a few hours before I passed the letter around, Angell received the J. G. Taylor Spink Award for outstanding contributions to baseball journalism. He was the first non-member of the BBWAA to win the award, and it was long overdue. After all, he's been writing about baseball in the "New Yorker" since the Spink Award was created in 1962. For decades, the consensus has been that he is the best baseball writer of the past two generations. Only the absence of beat reporting in his resume gave the BBWAA an excuse to snub him all these years. Finally, at age 93, he received the award this year.

I wish I had also found the letter I wrote to Angell that prompted this fine response. I do know that I wrote to him after reading a "New Yorker" piece titled "Sunshine Semester," written in April 1980, after his annual trek to spring training. It later served as Chapter 10 in the Angell collection titled Late Innings.The content of my letter can be gleaned from his response. Here it is, followed by my discussion of the events which prompted his original essay as well as his comments to me:
May 27
Dear Gabriel Schecter:
Please forgive my long delay in responding to your lively and generous letter about my recent baseball piece. It's extremely gratifying to hear from a fan who really cares about the game and who has gone to to [sic] the great trouble of writing back. I am feeling very cheerful about the old game, now that the strike has been averted, or at least postponed. For a while there, I really thought the owners were going to make it happen; their vengeful masochism knows no bounds--or almost no bounds. From what I hear, we should all be grateful to Edward Bennett Williams and the new Houston owner, whose name is McMullen, I think, who saved the game from the hard-liners. Every year, I tell myself that I won't underestimate the stupidity and greed of the owners, and then I go right ahead and underestimate it.

Yes, I noticed that Garcia threw in Singleton as a young AL player, but he said it, so I kept it in. And yes, I guess I should have mentioned Yount, but of course the Brewers have so many good young players that it's hard to get them all in. Now I see that Bamberger will be back in the dugout in a couple of weeks--good news for us all, because he is a fine fellow. I'd like to see the Brewers win, but this new Yankee club looks very tough. The new Yankees are also a pleasant bunch to visit--an amazing contrast to their clubhouse in recent years.

Thanks again for writing.

I'm glad that Angell was feeling cheerful enough about the game to write to a total stranger (and I don't mind that he misspelled my name, joining the always-expanding list of people who have done so). In "Sunshine Semester," he had expressed doubts about his obsession:

"Each year, just before spring comes, I begin to wonder if I shouldn't give up this game. Surely it must be time for me to cut short my abiding, summer-consuming preoccupation with scores and standings and averages, and to put an end to all those evening and weekend hours given to the tube and morning hours given to the sports pages. Is there no cure for this second-hand passion, which makes me a partner, however unwilling, in the blather of publicity, the demeaning emptiness of hero worship, and the inconceivably wasteful outpourings of money and energy that we give to professional sports now?. . . .Every year, I think about such things, often in the middle of the night, and I groan and say to myself, 'Yes, all right, this is the last year for me, no more baseball after this.' But then, a few days or weeks later, back in the sun in Arizona or Florida in March, I change my mind."

In his Spink Award acceptance speech, a mere 34 years after he wrote the above, Angell still lamented being an unwilling partner in the crasser aspects of baseball. As so often happens with the things we love, their essence captivates us at the same time that the business of it manages only to appall us. So it was with Angell in 1980, when a strike by the Players Association cancelled the final week of spring training. The players also voted to strike again on May 23 if their dispute with owners was not resolved (hence Angell's relief four days after the deadline). In April, he despaired of the prospects for a resolution:

"I cannot pretend to any mild neutrality about the issues involved; it has been perfectly plain to me from the start that the twenty-six owners and the league presidents and their advisers have determined that the basic structure of free-agency, which has governed the movement of senior players (players with six years' service in the majors), must be radically altered or they will close down the game. They are serious about this."

Angell devoted the next five pages to listing the owners' arguments and debunking them--the eternal hand-wringing about rising salaries, the claim that owners were losing money even while the value of their franchises was multiplying, the pleas of poverty in an industry that was booming, and their insistence on controlling the movement of every employee in their business, even if it meant shipping a happy and productive employee to another city where he had no desire to be. (Yes, employees. To this day, I've only heard one player express this truth; Greg Maddux, after the Braves declined to renew his contract in 2003, stated bluntly that he had been "fired". Here is Angell's final point:

"Finally, it should be understood that in the opinion of a great many baseball people--including this sideline expert--the owners' idea of allowing a club that loses a free agent to tap the middle levels of the buying team's roster will effectively put an end to the entire free-agent process. Very few clubs--perhaps none--would risk adding a free-agent star if this meant losing a solid current player or a coming star. . . .The owners' offer does stipulate that only an owner who has lost a 'prime' player--that is, a player for whom at least eight other clubs have said they intend to bid--can pick from the signing team's roster, but there is nothing in the proposal to prevent every club from making a token bid for each free agent from now on. The owners, it is plain, wish to turn back the clock. The players, for obvious reasons, refuse to give up the rights they have earned."

Hence the comments in Angell's letter about the close call that spring. A couple of maverick owners slowed down the hard-liners who wanted to undo the victory gained in the courts by the players in 1975-1976. The strike, as he noted, was "averted, or at least postponed." One year later, it struck with the force of a hurricane, shutting down the major leagues for two months. But in May 1980, we baseball fans--and Angell, above all, is the consummate fan, relishing and describing every aspect of the game on the field with the appreciation and discernment of an art lover at a great museum--could breathe easy, sit back, and enjoy the summer-long distraction of games, games, games.

The bulk of "Sunshine Semester" reviewed doings in spring training in 1980. In addition to my two nitpicky points to which Angell responded in his letter, I'm sure I mentioned some of the wonderful writing and insights which prompted me to contact him. Here is an assortment of gems from that essay:

I could read such musings all day long and endlessly marvel at his ability to see how one thing resembles something quite unrelated, like John Wockenfuss balanced atop a fence or Willie Horton's head seeming to shrink as he put on middle-age weight (yes, I had to look it up--"embonpoint" means stoutness). The other thing that sets Angell's essays apart are the quotes. Perhaps no writer has ever been a better listener than Angell, whose quotes get to the heart of the matter and the spirit of his subjects. I'll finish off here with three dandy quotes from "Sunshine Semester":
I'll leave you with that. Do yourself a favor. Pick up the nearest Roger Angell volume and start reading. Anywhere. It doesn't matter whether you've read him before or never at all. You'll want to follow him wherever he travels on the baseball landscape, and you'll wish he could live forever and keep writing more. As we baseball folk like to say, he's on a pace to. 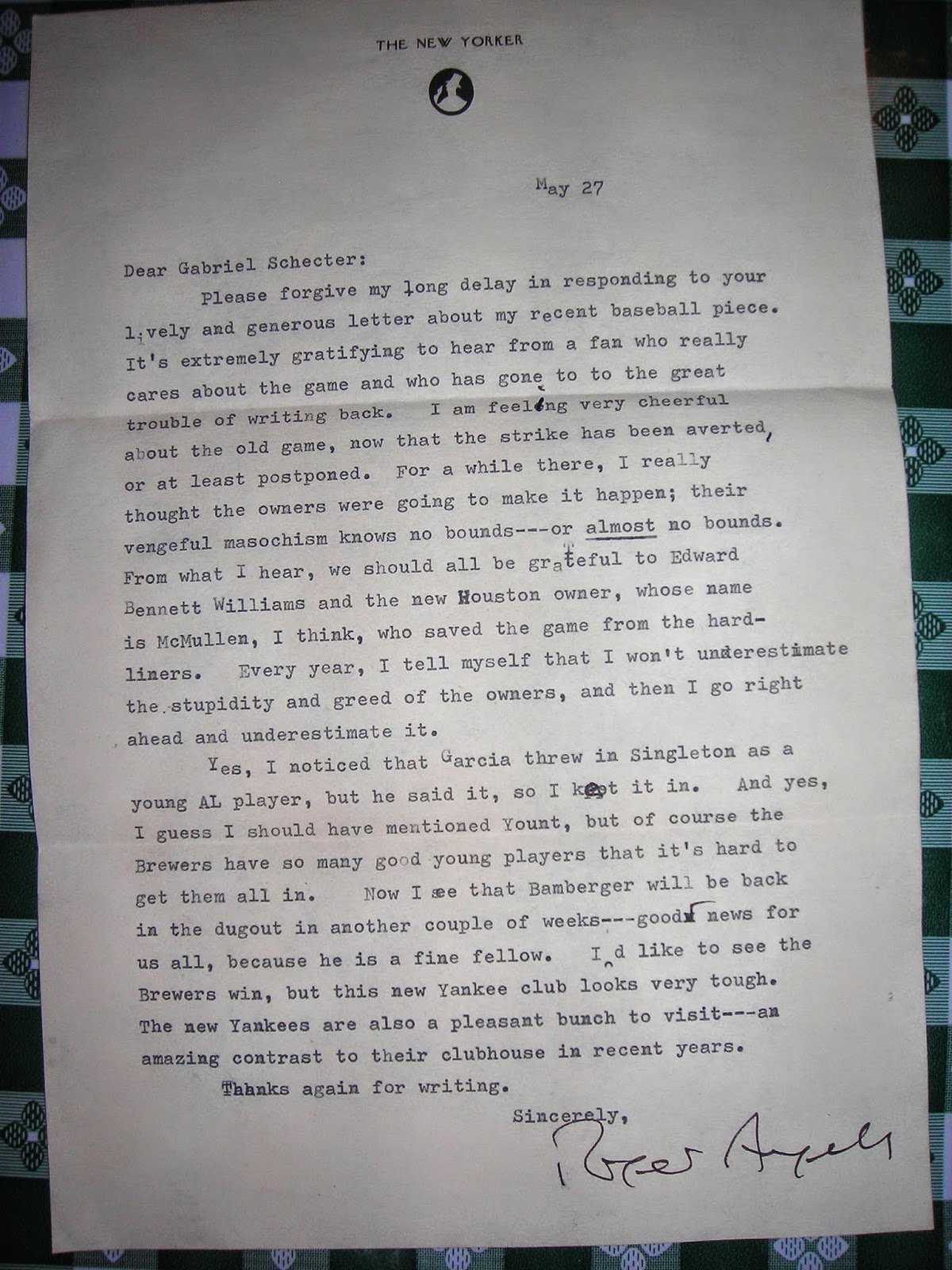 Posted by Gabriel Schechter at 3:02 PM