How I Inspired Don Larsen 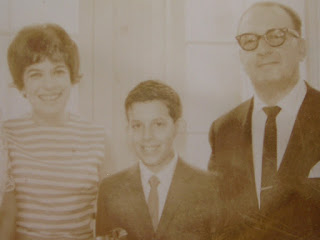 My parents and I in 1963, when my mother was 46.
Those were all preliminary findings, however, compared to the big quest—anything I could find about my one appearance on the stage. When I was five years old, I was in the BCP production of The Seven Year Itch, a Broadway hit which had been made into a popular movie remembered mostly for the iconic shot of Marilyn Monroe’s white dress getting ruffled.
I remember the experience well. I had to wear shiny shoes and a dress jacket, but they let me carry a toy of my own, a model car. I had four lines in the opening scene, where the hero sends his wife and son off to New England for a summer idyll while he toils away in the city. The idea is that he’ll be miserable—unless Marilyn Monroe moves in, but I didn’t know this. Two of my four lines were “poor Daddy,” and I remember having to feel really, really sorry for him. Here I am: 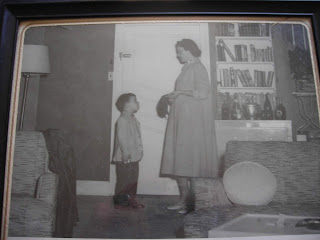 My four lines done, off I went to the chauffeured. . .excuse me, to the family Ford, to be whisked home and readied to go to bed. I was only five, after all. I never did see the play, and by the time I got around to seeing the movie, I could appreciate it fully.
Did the Bergen (County) Record have a record of my theatrical equivalent of a ballplayer’s cup of coffee? You bet it did, and that’s where a mystery arose. The first thing I found was the review, headlined “Players Open New Season With Well-Acted Laugh Hit.” After running through the anonymous reviewer’s praise of the six performers who carried the play, I found this:
Special mention must be made of the outstanding performance of young Gabriel Schechter, who portrays Ricky, the Sherman’s [sic] son, with brilliance and sincerity. 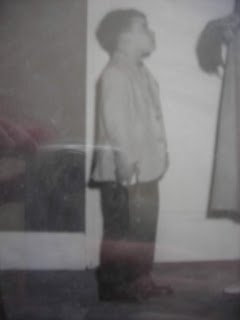 In four lines? I have already testified to my sincerity with “poor Daddy,” but how brilliant could the other two lines have been? Look at me. Sincere, yes, but sedentary at best. It's a declamatory posture I don't recall seeing in any Olivier bios. Or was something else going on?
The plot thickened when I found the item that appeared in the Record a few days earlier, the morning before opening night, the first of a dozen performances as the BCP began a new, ambitious policy of three performances a week. The 1956-1957 season also featured productions of Gigi and The Little Foxes. This preview was, I’m sure, written by someone at the Players, undoubtedly a friend of my parents. Listen to this hype:
Others in the cast include Judy Lash, Joan Cole, Doris Wheeler, and Ted Lash, with 5½-year-old Gabriel Schechter threatening to steal every scene in which he appears.
Excuse me? How many scenes was that? It sure sounded like more than four lines. I was a hyper little kid, so maybe I was like a Marx brother, running wild during rehearsals and stealing scenes I wasn’t even in. Did little Ricky have several scenes which I overwhelmed so thoroughly that they were dropped from the final production? I didn’t think so, because the memory of going home right after the scene has always been pretty strong. On the other hand, I couldn’t dismiss the possibility that the director realized that if he cut me down to just the opening scene, they wouldn’t have to deal with me the rest of the night.
My theory was that the publicity maven thought, “nice touch—Harold and Tanya will get a big kick out of that.” The Lashes, Joan, and Doris should have gotten a better agent. I’m sure my parents did get a kick out of it, though probably not as big as I did 62 years later.
*          *           *
It took me awhile to get my hands on a copy of the George Axelrod play so I could clear up the mystery of just when and how often I stole what. It arrived yesterday, and the suspense lasted only while I thumbed through it. For once, memory won--I had exactly four lines, and I disappeared from the play after the first five pages.
Ah, but what lines! I thought "poor Daddy" was my second and fourth line, with the other two lines equally brief and scintillating. But no. That lament was the entirety of my final two lines, the last delivered as the light fades and the scene returns to Ricky's father. However, the first two lines consisted of three sentences and a whopping 19 words.
Richard Sherman is a 38-year-old Manhattan businessman, perfected on Broadway by Tom Ewell, who also wooed Marilyn Monroe in the film version. He's reflecting on the scene yesterday when he sent his wife and son off to New England for the summer. He recalls little Ricky being "really upset when they left for the station. It was very flattering. I thought the kid was going to cry. . .
RICKY: But what about Daddy? Isn't Daddy coming with us?
HELEN: Daddy'll come up Friday night.
RICKY: But, Mommy, why can't Daddy come up with us now?
She explains that Daddy has to stay in the city and make money, so he'll only be able to visit them on weekend. Poor Daddy. She tells him that not only does Daddy have to work and make money, he's giving up cigarettes and alcohol for the summer. That brings the final, plaintive "poor Daddy. . . ."
Plenty of room for sincerity, and no doubt I nailed it. The "Who's Who" in the program assured patrons that "Gabriel Schechter, of New Milford, is making his debut in this production. His flare for dramatics comes natural, being the son of members of the players." The little scene-stealer! I retired my flare after that, auditioning for one BCP show as a teenager. Some other time, I'll tell you about the short film I starred in during grad school.
*          *           *
There's an odd postscript to my quest for the truth about The Seven Year Itch. The review appeared in the Bergen Record published the morning of October 8, 1956. As my baseball friends know, that was the day Don Larsen pitched his perfect game in Game 5 of the World Series at Yankee Stadium. Don Larsen lived in Bergen County. In fact, we had the same physician, Dr. Philip Pollack, who got Larsen to sign a postcard to me that winter. 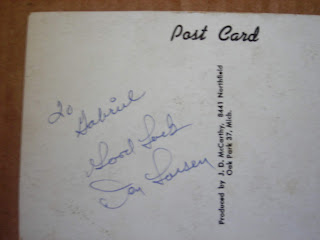 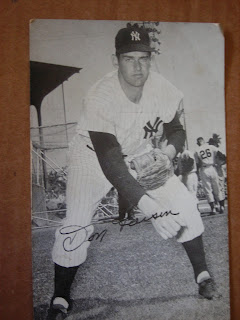 If I were writing a novel, we would see Larsen at the breakfast table, eating a hearty meal while reading the review. He exclaims to his wife, "By golly, that little 5 1/2-year-old kid was brilliant, wasn't he? I never saw anything like it. Maybe I can do something special at the ballpark today." That would have been complete fiction, of course, for several reasons (starting with "by golly"). Larsen stayed at a Manhattan hotel during the World Series and went out drinking that Sunday evening. Besides, he didn't even know he was starting Game 5 until he got to the ballpark on Monday.
Still, I can imagine it all I want. I can even think that somewhere out there is a person who attended both performances, or there was. The cosmic connection will stay with me always. Thanks, Don.
*          *           *
When 3D Comes to TV

Just focus your attention on this brand new invention
TV in three dimension is coming at you.
Now gals with good proportions will not suffer from distortions
And our most delightful portions are projected at you.
Just pick your favorite station and gals from every nation
Will make your imagination run away from you.
In very close proximity our utter femininity
Will rouse your masculinity in a way that’s new.
From the pages of hist’ry some ladies of myst’ry
With figures so blistery will pop into view.

When I’m Madame Du Barry
Ev’ry Tom and Dick and Harry
Will imagine that he’s Louis on the throne.
Ev’ry man from here to Dallas
Will be sleeping in my palace
But he’ll never, never, ever sleep alone.

Imagine when Salome
Does her dance in veils so foamy
And she starts to take the veils off one by one.
When she gets to number seven
Then 3D will seem like heaven.
Well, until the sponsor cuts into your fun.

I hear Marlene Dietrich
Who’s a very, very neat trick
Will make her 3D debut any day.
When she sings her famous tune
About the boys in the back room
Why there’s no telling what requests will come her way.

Mae West would be a riot
Ev’ry able man would try it
When she says “come up and see me, dear, sometime.”
And if Gypsy Rose is willing
She can make a 3D killing
And she wouldn’t even have to speak a line.

When Dagmar shows her glamour
On the screen in Cinerama
That’s when two dimensions look like more than three.
And you fellas from now on will
See a mountain, not a molehill
When you get that double vision on TV.

So focus your attention on this brand new invention
TV in three dimension is coming at you.
Just pick your favorite station and the gals from ev’ry nation
Will make your imagination run away with you.
TV will be more pungent and necklines that were plungin’
From now on will be lungin’, boys, directly at you.
We’ll change the nation’s habits and men who think they’re Babbitts
Will start to act like rabbits adding two and two.

Posted by Gabriel Schechter at 12:41 PM

There are a few things a pitcher ought to recollect about sponsorship up bases. Above all else, a pitcher must know where the sprinters are heretofore.토토사이트

The examples below is definetly for instance glimmer brilliant. Each one of these insignificant issues are built utilizing wide variety of cornerstone knowledge. I spend time these folks a great deal. https://reelpolice.com/

Thanks for the blog loaded with so many information. Stopping by your blog helped me to get what I was looking for. Radiologie Paris

I have read your article couple of times because your views are on my own for the most part. It is great content for every reader. 結婚指輪 福岡

You made such an interesting piece to read, giving every subject enlightenment for us to gain knowledge. Thanks for sharing the such information with us to read this... แทงบอลออนไลน์

This article is an appealing wealth of useful informative that is interesting and well-written. I commend your hard work on this and thank you for this information. I know it very well that if anyone visits your blog, then he/she will surely revisit it again. 婚約指輪